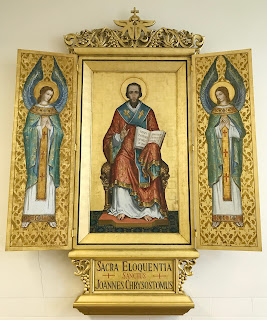 St. John Chrysostom, whose feast day we recently celebrated, is a Doctor of the Church, known as one of the great 4th century Church Fathers in both the East and the West. The name “Chrysostomos” (meaning the “Golden-mouthed”) refers to his reputation for his eloquent speech, which is evidenced in his voluminous collection of homilies. St. John, born in 347 A.D. in Antioch, was baptized at the age of 23. He abandoned a promising career in law for the monastery and priesthood, where he rapidly earned the reputation as a brilliant orator. Elected to the Patriarchate of Constantinople, he was exiled from his post more than once, and died in exile in 407. In addition to his sermons, treatises, and letters, St. John is responsible for compiling and beautifying one of the principal liturgical rites to come out of the Antiochene school. The Divine Liturgy of St. John Chrysostom remains one of the main rites in the Byzantine tradition. 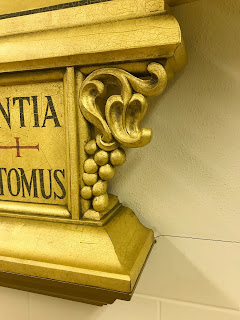 This triptych (three-part painting) is the first in a series of the triptychs at St. Mary’s Seminary. They are currently located in the upstairs classrooms in John Paul II, the building in the middle of the campus. Their original location, however, was somewhere different: they hung above the altars that line the back of the apse of the main Chapel.
What do the triptychs have in common? Each depicts a Saint that is recognized as a Doctor of the Church, flanked by angels, on a background of gold (as is common in iconography). The design of the frame bears a particular similarity in its structure and ornamentation to the Chapel architecture. Note the fruit of the vine above and below the image itself, which mirrors the same image in the Chapel dome and down to the pews (John 15:5: “I am the vine and you are the branches.”) Of course, the theme of angels is also one of the principal themes of the Chapel. 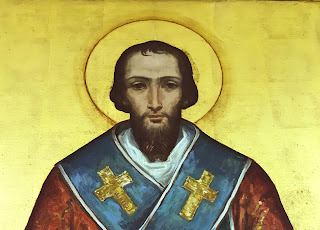 In this particular triptych, we see some of the main symbols of St. John Chrysostom: his gaunt face and his bare feet as evidence of his asceticism and fasting, the pallium proper to a bishop, his right hand extended in a gesture of blessing. 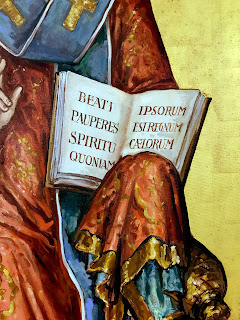 In his left hand, St. John is holding a book containing the Gospel of Matthew, with an excerpt from the Sermon on the Mount: “Beati pauperes spiritu quoniam ipsorum est regnum caelorum.” (Blessed are the poor in spirit, for theirs is the kingdom of heaven.)
From his Homily 15 (On the Beatitudes), St. John writes:
What is meant by "the poor in spirit?" The humble and contrite in mind. For by "spirit" He hath here designated the soul, and the faculty of choice. That is, since many are humble not willingly, but compelled by stress of circumstances; letting these pass (for this were no matter of praise), He blesses them first, who by choice humble and contract themselves. 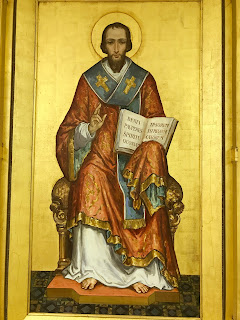 But why said he not, "the humble," but rather "the poor?" Because this is more than that. For He means here them who are awestruck, and tremble at the commandments of God. Whom also by His prophet Isaiah God earnestly accepting said, "To whom will I look, but to him who is meek and quiet, and trembleth at My words?" For indeed there are many kinds of humility: one is humble in his own measure, another with all excess of lowliness. It is this last lowliness of mind which that blessed prophet commends, picturing to us the temper that is not merely subdued, but utterly broken, when he saith, "The sacrifice for God is a contrite spirit, a contrite and an humble heart God will not despise." [Psalm 50 (51):7


From the example and teaching of St. John Chrysostom, we pray for his intercession, that we too may approach the Lord with humble and contrite hearts. 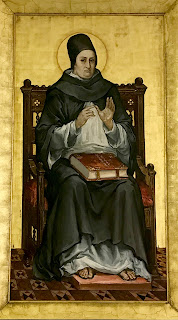 NON NISI TE, DOMINE: “Nothing but you Lord” 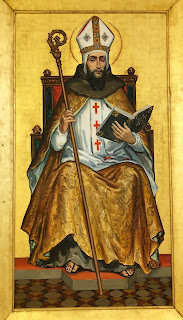